Following our screening in San Jose, California, our adventure to the Pacific Northwest continued in stride. After spending the Wednesday night in San Francisco with our cinematographer Chad, Tommy and Christian continued heading north in pursuit of Washougal, Washington. 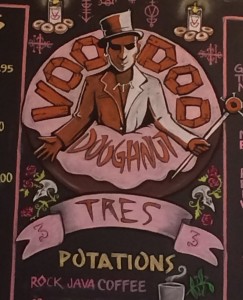 Following a day and a half of trekking with stops in Eugene and Portland, Oregon (and naturally shorter stops at Voodoo Doughnuts and the Rogue Ale House), our team made it to Washougal with great excitement for the Columbia Gorge International Film Festival.

A bit of background about this festival before we begin; the Columbia Gorge International Film Festival was founded by former Slamdance programmer Breven Warren eight years ago with the intention of creating a festival where filmmakers support the work of other filmmakers in a very intimate community atmosphere. Filmmakers have the option to camp out at the festival’s main venue, the Angaelica Farmhouse every night. Breven’s team prepares meals on a daily basis for the filmmakers, and the festival welcomes other acts including musicians and comics to share their work. During the week between weekend screenings, Breven and her team plan a number of trips for filmmakers to attend including whitewater rafting, kayaking, and hiking. This festival, simply put, is awesome.

We arrived to the festival the afternoon of Friday August 14th. Our first screening at the festival was scheduled for that night at the Farmhouse as part of the “Sometimes Things are just that Strange” series.

After checking out a few of the venues around the towns of Washougal, Camas and Vancouver, we headed back to the Farmhouse for all of the night’s festivities capped off by our late night screening. Following a wonderful home cooked meal and some great bonding time with other filmmakers, it was time for the “Sometimes Things are just that Strange” series to commence. Coupled with the short films, “Leonard” and “Unknown Unknown” as well as a number of comedy acts, this series certainly lived up to its name. Following hours of strange and exciting material, “Parallax” finally hit the screen at 1:30 AM to the eyes of many night owls. As the film wrapped at nearly 3 AM, we had concluded what was certainly an interesting night at the “Sometimes Things are just that Strange” series. 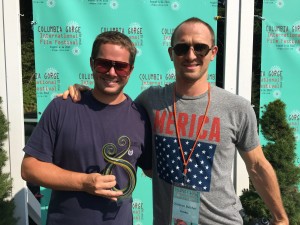 The following day, we were scheduled to play at the local Washougal High School paired with the interesting short film, “Samurai Opera.” A fairly packed room for the event, this was certainly one of our more interesting screenings of our run and the Q & A that followed with Tommy and Christian was a great one.

After our final screening at the festival, our team continued checking out different films in different venues throughout the rest of the day. As night came upon us, it was back to the Farmhouse for another evening of home cooked meals, live performances, and naturally some more films.

The festival concluded on Sunday August 16th with a beautiful brunch and awards ceremony at the Farmhouse. Hundreds of filmmakers who participated in the festival at one point or another returned for the ceremony before closing out their time in Washougal.

It was here that we took away our award for the “Most Original Feature Film” of the festival. After some kind words from the festival team, our trip had ended and it was time to head home. A wonderful time well spent in the Pacific Northwest, some memories to last a lifetime and an award to call ours. The trip was a success.