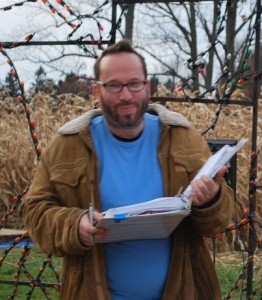 Roy Koriakin is a professional screenwriter, producer, and assistant director with nearly a decade in the industry. Currently he has five films distributed worldwide, three of them with Lions Gate. With all of these films in distribution he has developed relationships with major distributors including Lions Gate, Anchor Bay, Sony, Weinstein, and Relativity Media. He has produced over eight films, and has been an Assistant Director on six feature films.

As the lead writer and producer for the award winning full service video production house, Kphat Productions, he has created over one hundred television commercials and dozens of corporate and training videos. Early on, he spent 5 seasons as an associate story producer for the national MTV show, Viva la Bam.

He also writes for the international film website filmthreat, and has taught a film producing class at Filmtech in Philadelphia. He has written eleven feature film scripts, two that have been produced, one just sold to Lions Gate.