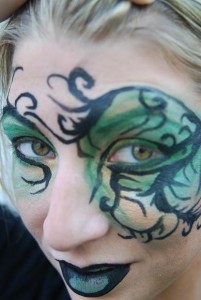 Liz started her career working for one of NYC’s top radiostations, K-ROCK, with bosses such as Howard Stern and Opie and Anthony. At K-ROCK, she participated in many voiceovers and promo events. After radio, she went back to her Ramapo College roots and started putting her film degree touse by working on various commercials and indie films. She worked in the Art Department on the feature-length films “Split Ends,” directed by Dorothy Lyman and “Kung Fu and Titties,” directed by Joseph “Odie” McConnell. During the KFT production, Liz took on the roles of Art Director, Costume Designer, Makeup Artist, Propmaster, and Co-Producer for the magical film.

Liz is a full-time working artist and received her second degree in Fine Arts with a teacher certification. She is constantly working on paintings, drawing, photography, makeup, her own hand-made craft business and various other art experiments when not working on films.

Liz Krov adheres to this strict policy in life: “Kicking the tires and lighting the fires.”