After spending the past few months taking Parallax to other cities on the United States eastern seaboard and south of France, our team was very excited to head back to Philadelphia and closer to our home roots for this wonderful little screening. Held on June 26th at the local arthouse PhilaMOCA, this smaller screening was a nice return to the area for us. 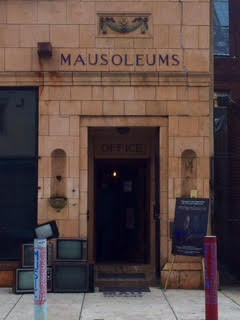 The night started around 7:00 PM as several of our actors, crew members, and other guests began filling the unique arthouse room. The hour long reception with food and drinks served as a great time for everyone to connect, catch up, and prepare for the film itself. Then around 8:00 PM, it was time to watch Parallax.

The film was very well received by the local audience and the post-screening Q & A session with several of our actors (Michael Kelberg, Robb Stech, Jim Ludovici, and Kim Carson) showed the audience's great interest in the film and all of the actor's roles within it. This screening served as a fun little send off for our team as we are now taking the film out west for screenings in San Francisco and Washington followed by the American Film Market in November!