We want to be part of it, New York, New York! Hopefully you read that in your best Frank Sinatra voice, and if not, give it a whirl again now that it makes sense what we were going for!

No surprise here, New York City was a very special screening for us. Not only was it a screening in the east coast entertainment capital, but equally important is that this screening was our first true film festival booking! Thanks to our new friends at the NewFilmmakers New York Film Series, we were fortunate enough to host our screening at one of the most storied venues in the Big Apple, the Anthology Film Archives.

The NewFilmmakers New York Film Series runs every Wednesday in the city, and generally consists of a block of short films followed by a feature presentation to end the evening. And sure enough, Wednesday May 13th was our turn to cap the evening! 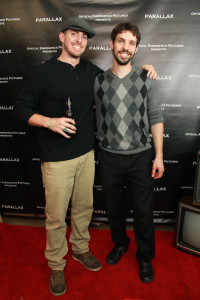 The night began with a collection of short films from all over the United States, and as we neared our screening time, the lobby filled with a collection of old friends, cast and crew members, and New York passerby's looking to catch a film for the evening. Guests enjoyed a collection of appetizers and drinks as they caught up and awaited the anticipated premiere. Then around 8:30, it was showtime!

From the perspective of someone who has seen multiple screenings of this film, the reception from this crowd was perhaps the best we have seen to date. It was extremely rewarding to see the film have such an impact on everyone who attended, and following a nice Q&A session after the film, our team felt great about this screening and the overall reception.

And so there it was, a great success in New York City! Up next for our team came a screening in France only two days after and now plans to hit the Philadelphia and west coast markets. There is a lot still to come throughout the next few months of our distribution plan and we're excited to have you following our efforts!